At Santa’s workshop they have been doing Christmas preparations around the year. The elves prepare themselves for the Christmas by learning new things and studying languages. Gifts are also made around the year even though the fall and Christmas time are the busiest time of the year. Santa’s job is to make sure that everything goes smoothly and without any problems. Recently it has been snowing a lot and the snow removal work has also taken Santa’s time. For several years the snow removal work has been done with Avant.

Santa Claus Holiday Village has been run by the family enterprise Napapiirin Lahja Oy in the Santa Claus Village since 1994. In 1994, the souvenir shop experienced a change of generation when Inga and her husband Marko Jääskö established today’s Napapiirin Lahja Oy. The time period between the beginning of December and the end of April is a busy season time. There are around 400 000 visitors and almost 100 different nationalities every year at the Arctic Circle in Finland.

Where to purchase a proper work machine?

Five years ago it was time to purchase a work machine. At the beginning it was needed mainly for the snow removal work and cutting grass, but it was clear that there could be also other use for the machine. One of the most important criteria was that it should be possible to work also in narrow places with the machine.

After comparing different machines they decided to purchase the green powerful compact loader: Avant! “We have been very satisfied with the machine. We have owned it for five years now and it has been in rather active use. During this whole time it hasn’t been broken once. This is a very remarkable advantage”, entrepreneur Marko Jääskö explains.

In the region of Rovaniemi, where the Avant is used, the climate is pretty arctic during the winter, which requires reliability from the machine. Jääskö mentions that reliability is one of the best properties of Avant. Besides this, Avant can be operated in narrow places, the power-to-size ratio is excellent and the wide selection of attachments makes Avant a very multifunctional loader. Napapiirin Lahja has several attachments in use: flipper bucket, sand/salt spreader, lawn mower, bucket broom, leveller, bucket, mini digger, pallet fork and wood chipper. “Also all the Avant’s attachments have been very durable and not one of them has been broken. I must say that the quality of both the machine and the attachments has been high!”, Jääskö praises.

During the season time after sales and its functionality have been of great importance. Avant Tecno has focused strongly on the development of the after sales and it shows also to the customers. “Especially the delivery of attachments and consumable spare parts has been fast”, Jääskö praises and continues “even the new tires arrived the next day after we made the order. Not every machine manufacturer can do that.” All in all, Avant gets an excellent grade from both the entrepreneurs and Santa Claus.

Avant wishes Merry Christmas to everyone and promises to serve all its customers, including Santa, as well also during the upcoming years. 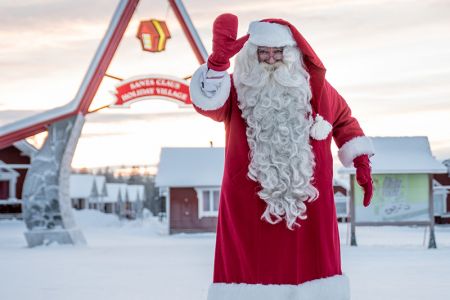 The Avant 800 series will be presented to the public at the Bauma 2019 trade fair in Munich, Germany from the 8th to the 14th of

April. The world’s largest trade fair for the construction industry, Bauma is held every three years at the Neue Messe München.

The last time Bauma was held in 2016, 3 425 exhibitors from 58 countries participated. Over the seven days the trade fair was open, Bauma welcomed 583 736 visitors from 219 countries. About 1500 journalists and media representatives from 47 countries were on hand to cover the event.