Avant is a valuable member of the top rider’s team

Gwendolen Fer is a professional eventing rider from France who started eventing on ponies already at the age of eight. Since then she has achieved a lot: Gwendolen has been the first female eventing rider to be selected for the European Championships since 2001 and the first French woman to win a three stars event. In 2016 she was pre-selected for the Olympic Games and won the CIC*** of Paris/Jardy. In 2017 Gwendolen was again selected to participate to the European Championships in Poland with the French team and she became France’s first female CCI**** winner in Pau, France.

Gwendolen manages the family stables Ecurie des Houarn which are located in the South-West of France, near Toulouse. Her team includes three to five members and the maximum capacity of the stables is 45 horses.

A multifunctional machine was needed at the stables

Because of the great amount of daily work at the stables, there was a need for a multifunctional machine. A friend of Gwendolen had an Avant which she was allowed to test – and the loader convinced her immediately. She and her team had seen and tested several machines but Avant was the most powerful one with the highest range of utilization and a high level of flexibility: Avant seemed like a multifunctional loader which can be used in very different areas and tasks, such as cleaning the stalls and carrying horse food.

The new team member Avant was purchased less than one year ago and according to Gwendolen it’s without a doubt the best machine at her stables. Thanks to its versatility the Avant is used almost every day. Before the Avant they used Manitou and Bobcat machines at the stables. “With Avant we could replace several machines with one unit and have a multifunctional loader which can be used in very different areas”, Gwendolen states and continues: “Avant is very easy to use and can be used by everyone at the stables (if they are allowed to) with very little training. It’s a real comfort for a stable manager to know that your employees are using a machine that is very safe to work with.”

Thanks to a wide range of attachments the Avant loader can be used in a variety of tasks. There are already many attachments in use at Gwendolen’s stables: several buckets (e.g. 4-in-1 bucket), a bale handler, a mini digger, and a push broom. They are also planning on purchasing a stump buster in the near future. Changing the attachment is quick and easy, and because of this it takes no effort to do different jobs during one day.

After 250 working hours Gwendolen can say that Avant was indeed a very good purchase: “Avant is definitely the best loader for stables currently available on the market. Its tight dimensions are clearly one of its main advantages. It allows us to turn in very tight stables and work there as productively as in larger spaces. It’s probably the only machine currently on the market which allows you to do so many tasks in a stable.” 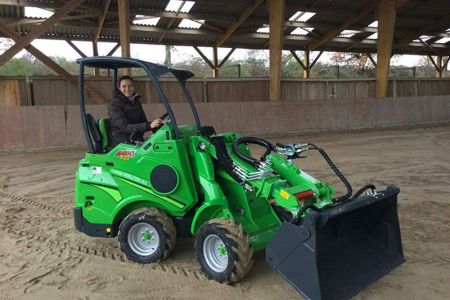 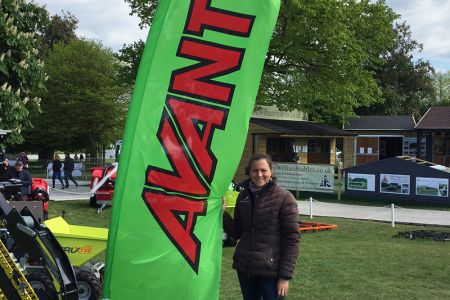 Eventing is an equestrian event which comprises of dressage, cross-country and show jumping (Olympic discipline since 1916). The ultimate form of eventing competition is the three-day event where each test takes place on a different day. The levels of international events are identified by the number of stars next to the category: there are four levels in total. The highest level of competition is the CCI**** with only six such competitions in the world (Badminton, Burghley, Lexington, Lumühlen, Adelaide, and Pau). CCI**** is the ultimate goal of many eventing riders. The rider and the horse with the fewest penalties (dressage’s errors, refusal, fall, exceeding the time limit, knocking down an obstacle, etc.) are crowned as the winner.

The Avant 800 series will be presented to the public at the Bauma 2019 trade fair in Munich, Germany from the 8th to the 14th of

April. The world’s largest trade fair for the construction industry, Bauma is held every three years at the Neue Messe München.

The last time Bauma was held in 2016, 3 425 exhibitors from 58 countries participated. Over the seven days the trade fair was open, Bauma welcomed 583 736 visitors from 219 countries. About 1500 journalists and media representatives from 47 countries were on hand to cover the event.